Ron Estes is the current Administrator of Christ Church of Rapid City. Prior to working for Christ Church, Ron served in the United States Air Force for 23 years retiring at Ellsworth AFB as Commander of the Logistics and Supply Squadron in 1990. During his tenure in the Air Force, Ron completed his Bachelor of Science in Meteorology from the University of Utah in Salt Lake City, Utah and later in 1983 a Master of Science in Computer Science from Texas A&M at College Station, Texas.

After retiring from the USAF, Ron was employed by the City of Rapid City for 23 years at the Rapid City Police Department. Ron served the city as the department’s Records Manager, Accreditation Manager, and Crime Analyst.

Ron and his wife Yvonne have four grown boys, seven wonderful grandchildren, and three lovely great-grandchildren. As one of the original members of Christ Church, he enjoys teaching the Bible and occasionally preaching at his home church and other churches in the Black Hills. 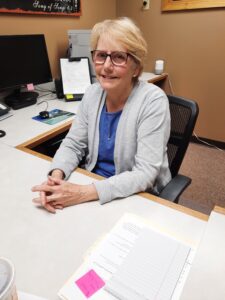 Alice Stradinger is the Administrative Assistant at Christ Church. She has been on staff since May 2021.  Alice is a graduate of the former Grace Bible Institute; Omaha, Nebraska.  She and her husband Ron moved to Rapid City in 2019. Alice’s work career has been in office work and prior to coming to Christ Church was an Administrative Assistant for Northwest Area Schools which is located in Isabel, South Dakota!  Alice and her husband Ron were blessed with 4 children  and now enjoy the role of grandparents and great grandparents.