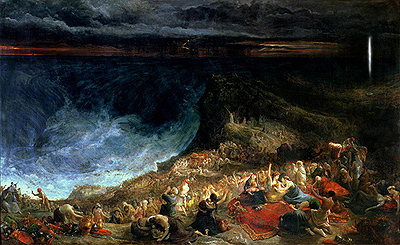 The Lord is Greater Than All gods
The exodus from Egypt is much more than a struggle against evil. It is about a people becoming a nation, God showing Himself to be the powerful God that He is, and it is about God revealing Himself to -and His expectations of- this new nation Israel.

Genesis shows God’s dealings with Abraham, Isaac, Jacob and Jacob’s sons. While the family numbers 70 by the time they reach Egypt during the famine, they are still a small group. Joseph explains to his brothers that 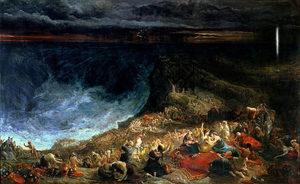 while the brothers meant him harm, God used it to bless the family, sheltering it during the famine (Genesis 50:15-21). You get the feeling that Joseph’s brothers weren’t, perhaps, all that religious. But then again, a religion, in the sense of worship of God, had yet to be born.

The first chapter of Exodus begins with a quick census; the brothers and their descendants, 70 here or 75 if you count Joseph’s descendants (Acts 7:14). They were fruitful and multiplied to 600,000 men and a total of 2 million by the time they flee Egypt. They had grown from a small family to a nation.

This a problem for Pharaoh. Pharaoh is worried that these children of Israel could rise up against him either on their own or by joining with an enemy of Egypt. Pharaoh’s response to Moses, who intercedes between God and Pharaoh on behalf of Israel is a hardening of his heart. It is not so much a conflict between good and evil, but Pharaoh’s inability to put his trust in the God of Israel.

Pharaoh’s trust was in himself and Egypt’s gods. He could have believed Moses, he could have believed that Moses would take Israel out of Egypt and leave Egypt alone. But he didn’t. Who can know what was going on in Pharaoh’s mind while Moses kept imploring him to let his people go and unleashing God’s signs. Was it the fear of Israel? Was it the potential loss of a huge slave workforce? What we do know is that he hardened his heart and would not – then could not believe God’s power was greater than his.

A Surprising Promise
Indeed, the people were delivered out of Egypt. The blood of a sacrificial lamb spread on the lintel and doorposts saved the first-born of Israel while the first-born of Egypt (including cattle) perished at midnight of that “pass-over”. It was retribution, if you will, for the murder of Israel’s baby boys in Exodus 1 and commemorated in Exodus 12:8.  The nation of Israel left Egypt after 430 years.

Because God’s promises are always true. That day, as families gathered and then the lambs who had been in the households for three days were slaughtered at twilight, did they wonder if they’d actually leave Egypt this time?  They probably did.

Three Signs
God made three signs for the children of Israel, signs to trust Him now and forevermore.

First, there were nine previous plagues on Egypt showing that God was unmistakably at work in their midst. Whether you’ve seen God do one, two or nine or miracles you know that not only God exists but He does what He promises to do.

The third sign was the parting of the Red Sea and the swallowing up of the Egyptian army when the Red Sea filled up again. The exodus from Egypt was necessary because God was freeing the people from oppressive slavery and going to bring them into the land that He had promised.

The Passover is still celebrated today by Jews and, although they might not realize it, by Christians.

The Passover is central to defining a Jew today – that God rescued Israel out of the hand of Pharaoh and spared Israel from the tenth plague:
Exdodus 12:26  “And when your children say to you, ‘What do you mean by this service?’ 27 you shall say, ‘It is the sacrifice of the Lord‘s Passover, for he passed over the houses of the people of Israel in Egypt, when he struck the Egyptians but spared our houses.’” And the people bowed their heads and worshiped. (ESV)

Nowadays, the Passover symbolizes the bitter tears of slavery in Egypt and the troubles of life, the haste in which they left Egypt, the saving blood of the lamb and the promise of redemption. There’s more to it that; there is an entire way of thinking and worship surrounding Passover that is incorporated into a way of life: God is greater then all gods,  God is always good, all people are created in His image, all Scripture is God-breathed and inerrant, etc.

For Christians, the Passover meal is central to understanding the Last Supper, the Lord’s Supper or communion. Jesus the Messiah came to Jerusalem at the start of the Passover preparations and is the Passover lamb (1 Corinthians 5:6-8) who ushered in the New Covenant. His blood covers the Believer so that at the last judgement we are passed over and do not experience sting of death.

After the Passover meal was eaten in the Upper Room and Jesus broke the matzah, he took the third cup – the cup of redemption. “Do this in remembrance of me”.  The fourth cup, the cup of praise, will be raised at the marriage supper of the Lamb.

That something we’ll address in Part 3.