Pentecost and Shavuot: A 3332 Year History 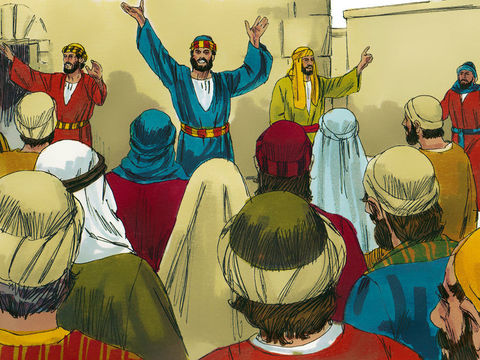 Now, there’s been some back and forth concerning which Sabbath God is referring to, but accepted tradition is that it refers to the day after the day of rest at the beginning of the Passover pilgrimage. Seven full weeks are counted after the first day of Passover. “Counting Omer” (“omer” means “sheaves”) is the counting of the 50 days leading up to the new grain offering, first fruit of the wheat harvest.

Christians call it Pentecost for the 50 days. Jewish people call is Shavuot (Weeks, see Deut 16:10). Leviticus prescribes that no work shall be done on the day because it is a holy day (Lev 23:20-21) and it is one of the three combined feasts and pilgrimages of the Biblical calendar.

One of the offerings presented to God is called “first fruits” (Numbers 28:26) – although it has nothing to do with fruit in the sense we think of it. The “first fruits” here is the wheat harvest. In addition to the grain offering (in the form of bread), two yearling lambs are also offered.

Jewish tradition says that Shavuot/Pentecost is also when the Law was given to Moses. While it is not explicitly stated in Leviticus 23 that “first fruits” is linked to the giving of the Law, we can see from Exodus 19 that the Israelites reached the wilderness of Sinai after two lunar months or somewhere in the ballpark (if not exactly) 50 days after they left Egypt.

Fifty days after the Exodus, Moses went up the mountain where God gave him the Law. The Law was given to humans created in God’s image, revealing what God expects of us and, in doing so, reveals to us His attributes. And, what happened a year after the Exodus? The tabernacle was made and God dwelt with the Israelites.

Jerusalem in Acts 2
In Acts 2:1 we find that on Shavuot/Pentecost the Apostles, the women, Yeshua’s/Jesus’ relatives and the 120 (Acts 1:14-15) were gathered together. The Holy Spirit came upon them and Peter began to speak to a “multitude”, some of whom were there for the feast, most were living in and around Jerusalem. Three thousand souls listened to Peter’s speech, repented, received the Holy Spirit and were baptized.

Notice in Exodus 24:7 the people said, “All that the Lord has spoken, we will do and we will be obedient.” That commitment did not last very long. In Exodus 32 we find the golden calf, as the Israelites slipped back to their comfort zone of idolatry, a comfort zone that cost 3,000 men their lives (Exodus 32:28). When Peter finished preaching, Acts 2:37-39 tells us those who heard Peter’s message said, “Brethren, what shall we do?” On Pentecost and since ever since Pentecost God has given every believer a Helper Jesus promised so that each of us can say, “We will do and we will be obedient” thanks to the indwelling of the Holy Spirit.

A Final Note
Jewish traditions of Shavuot include eating dairy foods because when the Law was given the people were like new babies. Cheese, cheesecake, blintzes, milk and ice cream! Are you a “babe” when it comes to the written word of God, or have you matured to be able to digest the meaty stuff?

Another Jewish tradition is reading the book of Ruth. Ruth was a gentile who became Jewish and is an ancestor of King David. The book of Ruth ties together the harvest and the sense of community. It is also a reminder that gentiles (the nations) would be part of God’s larger plan.

The Law was given 3332 years ago. Before the Law we could not fully understand what God desired of us. After the Law was given, we understood what He desired of us, but found it impossible to keep the Law based on our own merit. When the Messiah ascended and God’s Spirit came upon the 3132-plus people at Jerusalem, it became possible to do what God desires of us based on the merit of faith in the Messiah and the power of the Holy Spirit.