The Anniversary of the Destruction Two Temples 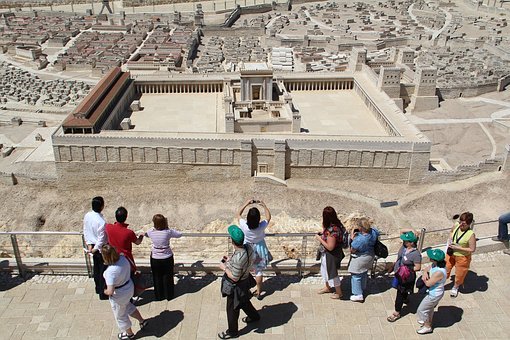 Today (July 30, 2020) is the anniversary of the Second Temple’s destruction in 70 AD. The Romans, under Titus, were putting down the Jewish Rebellion and in the process fulfilled Jesus’ prophesy.

Today’s date on the Jewish calendar has great significance: it is called Tisha B’Av and it is a day of fasting. Both the First and Second Temples were destroyed on the same day, 9th / 10th of Av. We could just interpret them as events that happened along time ago. However, they – especially the 70 AD event – has a very real impact on Christianity and world history.

A Closer Look
In the Book of Mark, Chapter 13, as Jesus finishes his discourses in the temple and comes out, “one of his disciples said to him, “Look, Teacher, what wonderful stones and what wonderful buildings!” 2 And Jesus said to him, “Do you see these great buildings? There will not be left here one stone upon another that will not be thrown down.” 3 And as he sat on the Mount of Olives opposite the temple, Peter and James and John and Andrew asked him privately, 4 “Tell us, when will these things be, and what will be the sign when all these things are about to be accomplished?”

The wonderful stones and wonderful buildings are pointed out here; in Luke 21:5, the “noble stones and offerings” are noted.  Was the Temple all that important to Jesus? Of course it was. After all, it was the center of worship, learning, discussion and sacrifice. However, the purpose or the point of was not the building itself, which became a symbol and more of an idol.

The Temple became a physical object instead of an object of spirituality. Luke 21:1-4 notes the rich giving out of abundance and the widow giving sacrificially. The widow’s offering had more spiritual depth. Indeed, with only a few exceptions it appears that the Temple area had lost its spiritual depth, the reflection of the spiritual depth of those worshiping (or believing they were worshiping) God there. God doesn’t want us to just go through the motions – He wants us to really, truly worship Him and have a pure faith.

Now, the possibility of the Temple being destroyed again was not taken lightly by the disciples and Sanhedrin!

The first Temple was destroyed as described in Jeremiah 52, because of the wickedness of King Zedekiah:
“In the fifth month, on the tenth day of the month—that was the nineteenth year of King Nebuchadnezzar, king of Babylon—Nebuzaradan the captain of the bodyguard, who served the king of Babylon, entered Jerusalem. 13 And he burned the house of the Lord, and the king’s house and all the houses of Jerusalem; every great house he burned down.”

It was utter destruction of the Temple and Jerusalem, and understandably Peter, James, John and Andrew wanted to know when the Temple was going to be destroyed again. If this second time was going to be as bad as the first, you certainly don’t want to be in Jerusalem! And Jesus’ warning in Luke 21:20-24 was clear.

When would the Temple be toppled? His reply in Mark 13:9-11, “But be on your guard. For they will deliver you over to councils, and you will be beaten in synagogues, and you will stand before governors and kings for my sake, to bear witness before them. 10 And the gospel must first be proclaimed to all nations. 11 And when they bring you to trial and deliver you over, do not be anxious beforehand what you are to say, but say whatever is given you in that hour, for it is not you who speak, but the Holy Spirit.”

The Temple was destroyed in 70 AD after the proclamation of the Gospel to the Gentiles (nations) and the persecution of believers (Jewish and Gentile) had begun. Among the Apostles, those killed were James the son of Zebedee (Acts 12), and Peter and Paul around 66AD. We also know from the epistle to the Hebrews that legalists were applying pressure, in the form of persecution, to Jewish believers sometime before 70AD.

The destruction of the Temple came at a time when the leaders of the early church were naturally dying, too – not just facing martyrdom. Those closest to the time of Jesus’ ministry on Earth were departing the land of the living. There’s a long history of God’s people going back to their old ways. Well, the destruction of the Temple meant there was no way the early church could drift from the grace of God through Messiah Jesus’ atoning death on the cross — and go back to relying on Temple sacrifices.

70 AD was a pivot point in Christianity. Sacrifices on the altar could never be an option moving forward.

Will There Be a Third Temple?
Some believe, using Daniel’s prophesies and 2 Thessalonians chapter 2 that a third Temple will be built where the “man of lawlessness” can “proclaim himself to be God.”  Others say that a third Temple is not necessary because the indwelling of the Holy Spirit makes the Temple unnecessary.

Certainly, the loss of the Second Temple forced the end of Mosaic sacrifices until sometime in the future (or forever). That means the only way to please God today is to worship Him with all our heart, all of our mind and all of our soul. The only acceptable sacrifice for our sin is Jesus the Messiah.

The only way we’ll know for sure if there will be a Third Temple is to see if it is built before the Messiah returns. Rebuilding the Temple has been impossible thus far.

Concluding Remarks
We don’t really see the destruction of the Temple in 70AD as an important event in the spread of Christianity. Why is that?  It certainly was a prediction of Jesus that bothered the Sanhedrin a lot! Perhaps we should give it its due and mark it on our Christian calendars as a time to reflect on the challenges of the early church.